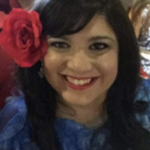 I was born and raised in Santa Fe, New Mexico. When I was young, my grandparents and parents used Spanish to communicate secretly with one another. I just had to know what they were saying! Little did I know, they were really talking about me eating vegetables for dinner; however, the desire I had to understand their secret language had the power to take me to different parts of the world.

In 2014, I received a BA in Chemistry and Spanish from the University of New Mexico. Somehow, language and culture stole my heart before science experiments did. In Chile, I lived and taught in the southern part of the Los Lagos region in the city of Puerto Montt in 2015. I recently also taught virtually for schools in La Unión and La Serena during the pandemic. In Spain, during the summers of 2013 and 2017 I traveled almost all the Iberian peninsula. Then, in 2018, I decided to live and teach in a small village of Jaén in Andalucía for a complete school year.

I have a MA in Spanish with a concentration in Southwestern Hispanic Studies. I currently live in Albuquerque, New Mexico. I can’t wait to share my favorite language, cultures, and experiences with you.