The Most Memorable Project

Nearing the end of last school year, my teacher, Señora Grugan, let the class start a daunting but very rewarding project: a podcast and blog.  At first, I was pretty skeptical. I have never been the most outgoing person and even thinking about creating a podcast for people to listen to frightened me. It was something that was completely new. It wasn’t busy work but rather more extensive than I even imagined. 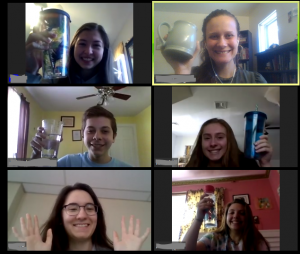 My class consisted of six students. I was the only student that attended Windber High School,  the others attended Tyrone Area High School. Although I knew them for a year, we weren’t necessarily friends, but simply classmates. When the project started, I was completely in awe of how inspired my classmates were. Every time we met for class on zoom, everyone would have their topics, outlines, and pictures ready and would be completely excited to assemble the podcast. Individually, everyone picked a topic that involved Latin American culture or some current event. I was personally struggling with what to write about. I did not know much that could be interesting and I disliked doing something cliché. One class period, Señora Grugan brought up a potential topic: The Underwater Museum of Cancún. I quickly fell in love with the beautiful statues inspired by the local fishing community. I then knew it was going to be my topic for the podcast.

It Was Hard Work

Everyone gathered information and composed a brief blog post about their topic. Each post was general and informative, but still unique to the student-author. What amazed me the most was that my classmates composed their posts entirely in Spanish. I think that sometimes we underestimate our skills and our abilities to express ourselves and just seeing the hundreds of words we wrote really put gave me a new perspective. It made me feel as if learning a language was really applicable and doable.

Soon after we posted the blogs, we started recording. My group consisted of Anna-Lynn and Skye. Saying I was nervous was an understatement. I was afraid it would have an awkward flow and feel pretty forced, but when we recorded, I think we all relaxed a bit and just chatted about the interesting cultures Latin America has to offer. I know Anna-Lynn talked about Frida Kahlo’s history and artwork (which was absolutely captivating to me), while Skye informed us about different cuisines. The other three students recorded their own podcast and it was added to the site our classmate Aden made.

Finally, the project was done. It took a lot of individual work and effort but it really was really worth coming together and talking about our findings. This whole project would not have been possible without Aden, Becca, and Señora Grugan. Though everyone put the effort forth, Aden and Becca, in my eyes, were the most driven about it and were the ones who asked to create it. I am ever so grateful to Señora Grugan for saying yes to that project because it brought me and the others a whole new perspective. It really was a daunting project, but in the end, it was worth it because it showed us how rewarding it is to learn a language. Our skills were good, but compiling them really showed us how much we learned over the years and how far we came. It was an experience I would not have gone through in any other class and I am sure it is the most unique and memorable project I have participated in.

Malia Schmidt is a Senior at Windber Area High School. She is also a  Spanish 4 Student in the World of Learning Institute. Malia has been a WOL Institute student for four years.

If you want to learn more about this student project contact Olivia Grugan ogrugan@iu08.org

World of Learning at IU8