This was not my idea!

How often can we, as teachers, say that about student work and projects? I know in my own teaching career most student projects, even the ones that take on a life of their own and become intrinsically motivating, originate with an assignment or a prompt from me. They have a deadline and often much more: scaffolded steps, instructions, rubrics. But not this one.

After schools closed their doors in PA on March 13th, I began hosting “Coffee Breaks” at 10 am every day on Zoom. I invited all fifteen of my Spanish 3 students to attend as they were able. At first one or two joined me for casual conversation in Spanish. They each texted a friend or two and soon our numbers grew until about half of the class was attending regularly. Since not all students in our district had access to internet at home, these sessions were not required, nor were they graded. Instead, students were welcome to come and go at their own discretion. Mostly they came and stayed. 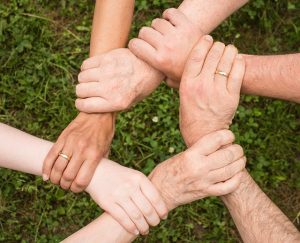 We discussed life, news, jokes, hobbies, boredom, the pandemic, family dynamics and anything else that felt relevant. We did it all in Spanish and often stuck around for about an hour a day, chatting and drinking our coffee or tea. By the end of the school year, many of these students expressed that they had learned more effectively in this format than they had in our planned and evaluated work the previous six months. They told me they had been chatting outside of Coffee Breaks about how they wanted to finish up the year. They had an idea: We want to make a website with blog articles and a podcast.

What a wonderful role to play!

Over the next two weeks, seven students (from two different schools!) worked together inside and outside of our Coffee Breaks to develop Podcast Progresista. The focus of this project is on positive things happening in Latin America. As my students say in the “Sobre Nosotros” of the site, “This site was created…to spread positivity.”  With lots of focus on the negative elements of life in Latin America, they decided to emphasize that which is “marvelous and incredible.” Their upbeat blog posts become the subject of their three-way podcasts in which they interview each other about these positive topics and share their personal take. After looking at the first draft of the site, I asked them what role they wanted me to play. They requested that I check the content for understandability, but not for grammar or language. This was their project, their writing. It was their idea. My role was secondary, and what a wonderful role to play!

World of Learning at IU8